IC Insights expects annual global IC market growth rates to closely track the performance of worldwide GDP growth. In the recently released The McClean Report 2016, IC Insights forecasts 2.7% global GDP growth for 2016, only marginally ahead of what is considered to be the recession threshold of 2.5% growth.

In many areas of the world, local economies have slowed. For example, economic growth in China slipped below 7% in 2015. China, which is the leading market for personal computers, digital TVs, smartphones, new commercial aircraft, and automobiles, is forecast to lose more economic momentum in 2016. Its GDP is forecast to increase 6.3% in 2016, which continues a slide in that country’s annual GDP growth rate that started in 2010.

While the U.S. economy is far from perfect, it is currently one of the most significant positive driving forces in the worldwide economy. The U.S. accounted for 22% of worldwide GDP in 2015. U.S. GDP is forecast to grow 2.5% in 2016. Given its size and strength, the U.S. economy greatly influences overall global GDP growth. An improving employment picture and the low price of oil are factors that should positively impact the U.S. economy in 2016.

In addition, IC Insights nothed that a stable IC pricing environment is expected through 2020 due in part to fewer suppliers in various IC markets (i.e., DRAM, MPU, etc.), lower capital spending as a percent of sales, and no significant new IC manufacturers entering the market in the future (the surge of Chinese IC companies that entered the market in the early 2000’s is assumed to be the last large group of newcomers.

Semiconductor capital spending as a percent of sales is forecast to remain in the mid- to high-teens range through 2020. IC Insights believes spending at this level will not lead to an industry-wide overcapacity during the forecast period.

TSMC joined the group of top-10 R&D spenders for the first time in 2010, giving an indication of just how important TSMC and other pure-play foundries have become to the IC industry with continuing technological progress. 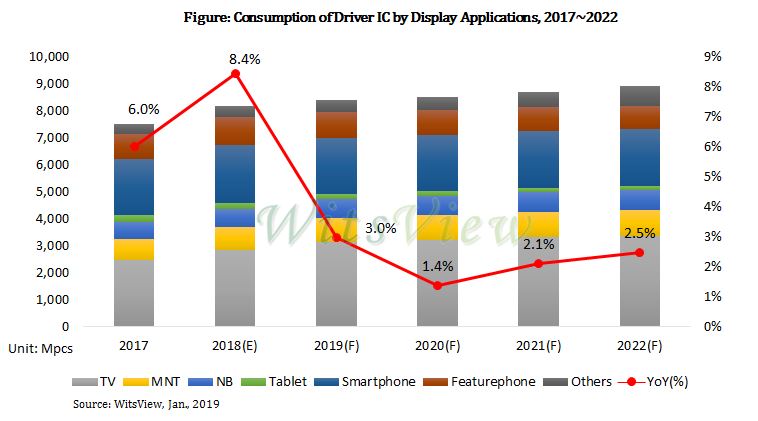 According to the latest report by WitsView, a division of TrendForce, increasing penetration of UHD display panels has driven the consumption of driver IC in the past few years. The total consumption grew by 8.4% YoY in 2018, but the growth would slow down to 3% this year due to technology variation in designs of large-size panels and falling shipments of small-size panels.As for the breakdown of driver IC consumption by types of application, TV panels would consume around 35% of all the driver ICs, remaining the major growth momentum in 2019, says Julian Lee, the assistant research manager of WitsView. However, with growing demand for narrow-border products and wider adoption of the Gate on Array technology in new devices, growth in the consumption of driver ICs by large-size panels would be moderated this year. In the segment of small-size panel, the consumption of driver ICs would drop due to weak sales in the global smartphone market and the decrease in tablet market size. Overall speaking, growth in the driver IC market would slow down compared with past few years, before momentum appears again after 2021, when electronic devices anticipate a new wave of specs upgrade due to higher transmission speed in the maturing 5G network. By then, the next wave of replacement demand for smartphones, higher penetration of 8K TV, and the emergence of new applications like Internet of Vehicle and IoT would again trigger growth in the driver IC market.Film for Chip-on-Film packaging would see undersupply in 2019As 18:9 becomes the mainstream aspect ratio for new generation smartphones, phone makers have been working to make bezels narrower. Therefore, smartphones, such as the three new iPhones launched last year, have been switching from solutions based on Chip-on-Glass (COG) packaging to those on Chip-on-Film (COF) packaging. On the other hand, new production capacity of large-size panels in China has pushed up the shipments of TV panels, increasing the demand for films used in COF packaging as well. However, in the past few years, makers of the film for COF packaging have not invested new capacity due to weak profitability, so the recent demand increase may result in a tight supply of films.WitsView notes that TVs and LCD monitors also use COF packaging, but the profits are lower than COF packaging for smartphones. Since the number of smartphones using COF packaging is highly likely to double in 2019, the supply of film for TVs and LCD monitors may be squeezed. The global shipments of panel would also be influenced as films in COF packaging for large-size panels may see undersupply in 1H19.
2019-01-08 00:00 reading：408 China-based companies show the largest fabless IC marketshare gain since 2010.Research included in the March Update to the 2018 edition of IC Insights’ McClean Report shows that fabless IC suppliers accounted for 27% of the world’s IC sales in 2017—an increase from 18% ten years earlier in 2007.  As the name implies, fabless IC companies do not operate an IC fabrication facility of their own.Figure 1 shows the 2017 fabless company share of IC sales by company headquarters location.  At 53%, U.S. companies accounted for the greatest share of fabless IC sales last year, although this share was down from 69% in 2010 (due in part to the acquisition of U.S.-based Broadcom by Singapore-based Avago).  Broadcom Limited currently describes itself as a “co-headquartered” company with its headquarters in San Jose, California and Singapore, but it is in the process of establishing its headquarters entirely in the U.S.  Once this takes place, the U.S. share of the fabless companies IC sales will again be about 69%.Figure 1Taiwan captured 16% share of total fabless company IC sales in 2017, about the same percentage that it held in 2010.  MediaTek, Novatek, and Realtek each had more than $1.0 billion in IC sales last year and each was ranked among the top-20 largest fabless IC companies.China is playing a bigger role in the fabless IC market.  Since 2010, the largest fabless IC marketshare increase has come from the Chinese suppliers, which captured 5% share in 2010 but represented 11% of total fabless IC sales in 2017.  Figure 2 shows that 10 Chinese fabless companies were included in the top-50 fabless IC supplier list in 2017 compared to only one company in 2009. Unigroup was the largest Chinese fabless IC supplier (and ninth-largest global fabless supplier) in 2017 with sales of $2.1 billion. It is worth noting that when excluding the internal transfers of HiSilicon (over 90% of its sales go to its parent company Huawei), ZTE, and Datang, the Chinese share of the fabless market drops to about 6%.  Figure 2European companies held only 2% of the fabless IC company marketshare in 2017 as compared to 4% in 2010.  The loss of share was due to the acquisition of U.K.-based CSR, the second-largest European fabless IC supplier, by U.S.-based Qualcomm in 1Q15 and the purchase of Germany-based Lantiq, the third-largest European fabless IC supplier, by Intel in 2Q15.  These acquisitions left U.K.-based Dialog ($1.4 billion in sales in 2017) and Norway-based Nordic ($236 million in sales in 2017) as the only two European-based fabless IC suppliers to make the list of top-50 fabless IC suppliers last year.The fabless IC business model is not so prominent in Japan or in South Korea.  Megachips, which saw its 2017 sales jump by 40% to $640 million, was the largest Japan-based fabless IC supplier.  The lone South Korean company among the top-50 largest fabless suppliers was Silicon Works, which had a 15% increase in sales last year to $605 million.
2018-03-23 00:00 reading：392 IC Insights’ latest market, unit, and average selling price forecasts for 33 major IC product segments for 2018 through 2022 is included in the March Update to the 2018 McClean Report (MR18).  The Update also includes an analysis of the major semiconductor suppliers’ capital spending plans for this year.The biggest adjustments to the original MR18 IC market forecasts were to the memory market; specifically the DRAM and NAND flash segments.  The DRAM and NAND flash memory market growth forecasts for 2018 have been adjusted upward to 37% for DRAM (13% shown in MR18) and 17% for NAND flash (10% shown in MR18).The big increase in the DRAM market forecast for 2018 is primarily due to a much stronger ASP expected for this year than was originally forecast.  IC Insights now forecasts that the DRAM ASP will register a 36% jump in 2018 as compared to 2017, when the DRAM ASP surged by an amazing 81%.  Moreover, the NAND flash ASP is forecast to increase 10% this year, after jumping by 45% in 2017.  In contrast to strong DRAM and NAND flash ASP increases, 2018 unit volume growth for these product segments is expected to be up only 1% and 6%, respectively.At $99.6 billion, the DRAM market is forecast to be by far the largest single product category in the IC industry in 2018, exceeding the expected NAND flash market ($62.1 billion) by $37.5 billion.  Figure 1 shows that the DRAM market has provided a significant tailwind or headwind for total worldwide IC market growth in four out of the last five years.The DRAM market dropped by 8% in 2016, spurred by a 12% decline in ASP, and the DRAM segment became a headwind to worldwide IC market growth that year instead of the tailwind it had been in 2013 and 2014.  As shown, the DRAM market shaved two percentage points off of total IC industry growth in 2016.  In contrast, the DRAM segment boosted total IC market growth last year by nine percentage points.  For 2018, the expected five point positive impact of the DRAM market on total IC market growth is forecast to be much less significant than it was in 2017.FIgure 1
2018-03-15 00:00 reading：519
Popular categories
Boxes, Enclosures, Racks Cables, Wires Circuit Protection Connectors, Interconnects Development Kits Electromechanical Embedded Solutions Fans, Thermal Management Optoelectronics Others Passive Components Power Semiconductors Sensors, Transducers Test and Measurement
Hot labels
ROHM
IC
Averlogic
Intel
Samsung
IoT
AI
Sensor
Chip
Original authorized brand