How could a tiny island nation with only one local car OEM possibly become the next hub for the global automotive industry?

Taiwan is nursing just such an expectation, with precedents to buoy its hopes. Today, Taiwan’s industrial success is rooted in the PC and smartphone markets. So, the template for this small nation’s transformation to automotive importance is already established.

Taiwan’s ambitions, of course, seem like a pipe dream, according to assessments by automotive industry analysts and based on Taiwan’s virtually non-existent role in the automotive market.

Mike Demler, senior analyst at The Linley Group, bluntly noted, “Honestly, I can’t think of anything for which Taiwan is known in the automotive industry.”
Ian Riches, director for the Automotive Electronics service at Strategy Analytics, agreed.

Phil Magney, founder and principal advisor for Vision Systems Intelligence, was a little more kind. “I know of some electronic components coming out of Taiwan for infotainment, lighting and some other areas.” But he added, “I do not think they have enough experience to build the integrated safety systems and meet the stringent functional safety requirements.”
Admittedly, Taiwan is at a very early learning stage in the automotive market. Paul Chou, secretary general of Taiwan Telematics Industry Association, however, isn’t discouraged.

During an interview at Taipei Ampa, the International Auto Parts and Accessories Trade show this week, Chou recalled the birth of PCs. “The PC industry then was very fragmented," he said, "and things were very chaotic” -- just like the auto industry today, on the cusp of rolling out highly automated vehicles.

In the PC world, once Microsoft’s Bill Gates began pushing Windows and Intel’s Andy Grove promoted the X86 processor architecture, efforts to build PCs coalesced around the Wintel platform. Then, Taiwan hatched its plot for the PC market -- perhaps faster than any other nation.

In the following five years, startups sprang up all over Taiwan, many of them engaged in developing and putting together everything from I/O, motherboards to mouse, keyboards and everything else that goes into a PC, explained Chou.

Taiwan created a solid ODM business for the PC industry. Now it commands 90 percent of global notebook PC production. Taiwan also became a key supplier of quality components for the PC market, and later did it again with the smartphone market, noted Chou.

Big acquisitions like Intel’s buying Mobileye and Qualcomm taking over NXP/Freescale underscore the consolidation and partnerships emerging and accelerating in automotive. Chou believes it’s time for Taiwan to replicate a successful business model — which worked in the information and communications technology industry — in the auto sector.

Chou told a group of reporters: “Taiwan won’t be absent from the coming autonomous driving market.”

But how, really, do Taiwan’s aspirational goals match reality? What automotive-related products does Taiwan make today?

Chou pegged Taiwan’s automotive-related business output to be about $19.5 billion in 2016.  Of this, $6.5 billion comes from domestic car production, $6.95 billion is contributed by parts and components manufacturers, and $6.07 billion from vehicle electronics. 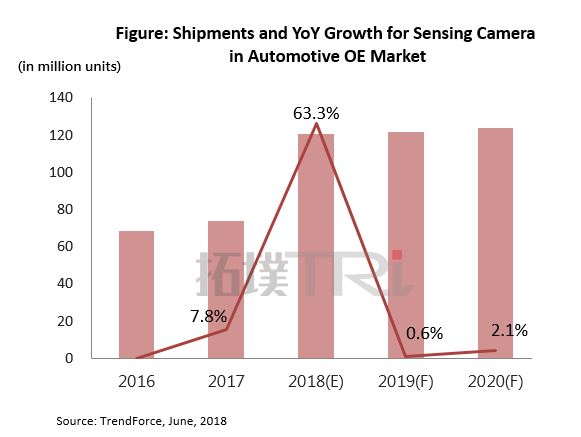 According to the latest research by TrendForce, the demand for sensing camera in automotive OE (Original Equipment) market will see considerable growth in 2018, driven by the development of smart vehicles in high-end market and the establishment of regulations in the U.S., the EU, Japan and China. The shipments of sensing camera in automotive OE market are expected to reach 121 million units in 2018, a year-on-year growth of 63% compared with 74 million units in 2017.“The soaring demand for sensing cameras is attributed to the development of autonomous driving”, says Yvette Lin, analyst of TrendForce. Driven by advancements in artificial intelligence, communication and sensing technology, many technology companies and traditional car makers have invested in the R&D of autonomous driving. Consumers also show increasing concerns for active safety, which push the demand for advanced driver assistance system (ADAS) and sensors.Currently, car makers adopt different ADAS sensing solutions, including millimeter-wave radar, ultrasonic radar and automotive camera, etc. Particularly, camera-based solutions are gradually accepted by car manufacturers since breakthroughs have been made in image recognition algorithms and capabilities of image processing chips. Camera-based solutions, which can detect the traffic around vehicles through image recognition, are now applied in both cars with ADAS and autonomous-driving vehicles in testing.According to Lin, current mass produced cars with ADAS carry an average of 4 to 8 cameras per car. After the launch of highly-autonomous vehicle in 2020, the number of cameras embedded in each car will increase to 10 to 12. In this trend, major camera manufacturers across the world have been actively deploying in the automotive market, including Chinese companies Sunny Optical and Sunex, Taiwan-based Asia Optical and Calin, and Korean manufactures Sekonix, who have been shipping products to the first-tier car makers.In addition to the development of smart vehicles in high-end market, the establishment of regulations for vehicle safety in the U.S., the EU, Japan and China also drives the rapid expansion of market. Since 2016, forward collision warning (FCW), lane maintenance system (LDW), automatic emergency braking system (AEB), and blind spot detection system (BSD) have been mandatory for vehicles or included in the New Car Evaluation Standard (NCAP) in areas like the United States, the European Union, and Japan. Particularly, China has for the first time included a number of evaluation criteria for active safety in the 2018 version of NCAP. As the largest market of cars in the world, China witnesses increasing demand for sensing camera, which will boost the global market for automotive sensing camera. TrendForce estimates that the shipments of automotive sensing camera will reach nearly 124 million units by 2020.
2018-06-13 00:00 reading：422