The value of the global market for active-matrix organic light-emitting diode (AMOLED) panels is expected to reach $25.2 billion in 2017, an increase of 63 percent from 2016, thanks to growing use of AMOLED panels in smartphones and TVs, according to market research firm IHS Markit.

According to Ricky Park, director of display research at IHS Markit, in addition to smartphones and TVs, the AMOLED panel market will also get a lift from rising demand in  head-mount displays and mobile PCs.

AMOLED display use has rapidly risen in the smartphone market in particular as the flexible substrate allows phones to be produced in various designs with a lighter and slimmer bodies, IHS Markit said. Leading smartphone makers have competitively rolled out premium phones this year that boast a narrow bezel or nearly bezel-less designs, the firm noted.

"The AMOLED display market is also expected to get a boost from Apple’s decision to use an AMOLED screen in its iPhone series to be released later this year, and Chinese smartphone makers’ moving to newer applications of AMOLED panels," Park said, in a press statement.

Park said South Korean and Chinese display makers have been heavily investing in Generation 6 AMOLED fabs in order to increase capacity to meet the surging demand.

The AMOLED TV panel market, the second largest market for AMOLED displays, is expected to grow to 1.5 million units this year, up from 890,000 units last year, according to IHS Markit's display demand forecast tracker. By 2021, the AMOLED panel market is projected to expand at a compound annual growth rate of 22 percent to exceed $40 billion, IHS Markit predicts.

Next：Chip Sales Rose Again in May

Smartphone Shipments Expected to Rebound in 2019

Shipments of smartphones, the mainstay of the electronics industry, are expected to rebound, returning to low-single-digit growth in 2019, according to market research firm International Data Corp. (IDC).Shipments are expected to grow 2.6% in 2019 after falling by 3% to 1.42 billion units in 2018 from 1.47 billion in 2017, said IDC. Longer term, smartphone shipments are forecast to reach 1.57 billion units in 2022.Forget, for the time being, the U.S.-China trade war. Emerging markets, 5G, and new product form factors will help revive the smartphone market, according to the market research firm. India is one of the key markets boosting shipments.“India is definitely on the radar — as of the third quarter in 2018, it has overtaken the U.S. as the world’s second-largest smartphone market,” IDC Associate Research Director Melissa Chau told EE Times. “In 2018, while we still expect China shipments to be roughly three times the volume of India, by 2022, that ratio will shrink to 2:1.”India is one of the few markets that has not hit maturity and still has a way to go even in 4G adoption, which will help fuel growth, according to IDC.China, which represented 30% of total shipments in 2017, is showing signs of recovery. While the world’s largest market is still forecast to decline by 8.8% in 2018, IDC anticipates a flat 2019, followed by growth through 2022.“We don’t expect China to be leading the smartphone growth rebound, especially in light of all the trade war impacts being felt,” said Chau.China’s slowdown will persist into the first quarter of 2019, according to IDC. The recently lifted U.S. ban on ZTE had an impact on shipments in the third quarter of 2018 and created a sizable gap that is yet to be filled heading into 2019.Growth expectations are based on emerging markets, but if the U.S.-China trade war escalates, there would be a greater negative impact on the industry, probably ratcheting the outlook down to a flat or declining scenario, according to Chau.That said, the companies currently benefiting from smartphone growth are the midrange Chinese players like Huawei and OPPO that are targeting maturing markets, she added.The U.S. is forecast to rebound in 2019 with 2.1% annual growth after shrinking in 2018.The smartphone market is set to pick up as major suppliers such as Samsung and Apple shift toward larger screens and more powerful devices.“With many of the large global companies focusing on high-end product launches, hoping to draw in consumers looking to upgrade based on specifications and premium devices, we can expect head-to-head competition within this segment during the holiday quarter and into 2019 to be exceptionally high,” said IDC Senior Research Analyst Sangeetika Srivastava.In the third quarter of 2018, the 6-inch to less-than-7-inch screen size range stood out with more than four times year-over-year growth. Larger-screen phones (5.5 inches and above) will lead growth with volumes of 947.1 million in 2018, accounting for 66.7% of all smartphones, up from 623.3 million units and a 42.5% share in 2017, according to IDC. By 2022, shipments of these larger-screen smartphones will move up to 1.38 billion units or 87.7% of overall shipment volume.The normal size of a smartphone has shifted dramatically, and while phone makers stretch the limits with bezel-less devices, the next big switch will be flexible screens, said IDC.Segment breakdownAndroid’s smartphone share will remain stable at 85% throughout the forecast period. Volumes are expected to grow at a five-year compound annual growth rate (CAGR) of 1.7%, with shipments approaching 1.36 billion in 2022. Android average selling prices (ASPs) are expected to grow by 9.6% in 2018 to $258, up from $235 in 2017.IDC expects price increases to continue through the forecast but at a softened rate from 2019 and beyond. Not only are market players pushing upgraded specs and materials to offset decreasing replacement rates, but they are also meeting consumer needs for better performance.iOS smartphones are forecast to drop by 2.5% in 2018 to 210.4 million units. The launch of expensive and bigger-screen iOS smartphones in the third quarter of 2018 helped Apple to raise its ASP yet impeded any increase of shipments amid the market slump.IDC is forecasting iPhone shipments to grow at a five-year CAGR of 0.1%, reaching volumes of 217.3 million in 2022. Apple will continue to lead the global premium market segment, according to the IDC forecast.
2018-12-14 00:00 reading：373 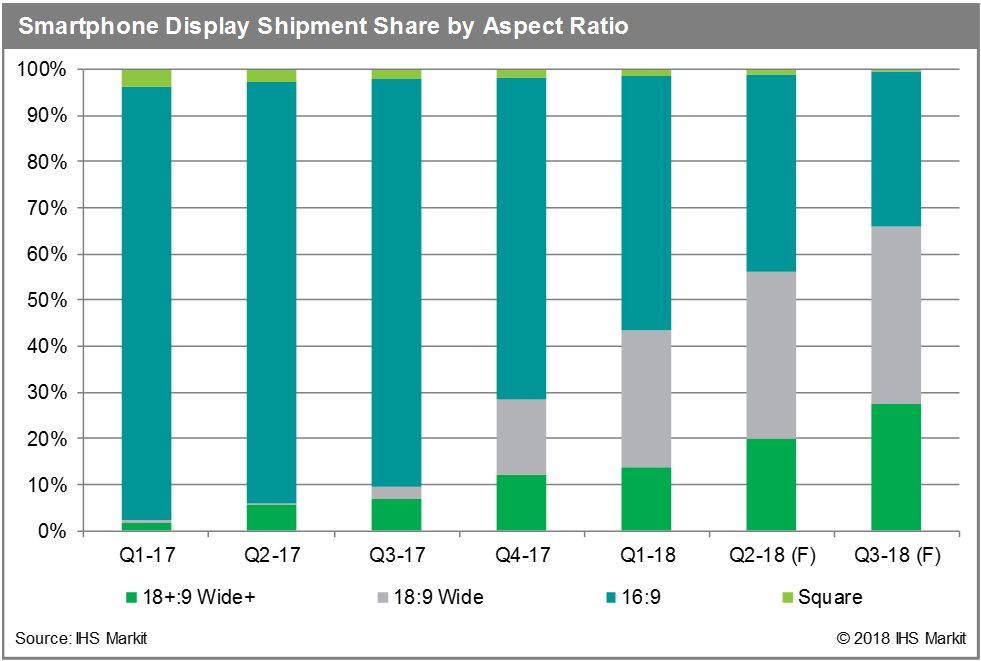 Smartphone Displays Set to Move Rapidly to 18:9 and Wider Aspect Ratios in Second Half of 2018

With every smartphone brand applying the 18:9 and wider aspect ratio screens to its newer models, the rate of adoption is expected to quicken in the second half of 2018. Smartphones using 18:9 and wider aspect screens are forecast to increase to 66 percent of total smartphone shipments in the third quarter of 2018, soaring up from 10 percent in the same period last year, according to business information provider IHS Markit (Nasdaq: INFO). After Samsung Electronics and Apple released their phones last year with new wider aspect ratios of 18.5:9 and 19.5:9, respectively, most smartphone brands have similarly followed suit by applying wider aspect screens to their 2018 lineup to keep up with product differentiation.Improvements in display technologies have hastened the expansion of the wider screen adoption in smartphones. Initially, flexible active-matrix organic light-emitting diode (AMOLED) technology was required to realize a full-screen display, and thus, 18:9 or wider screens were expected predominantly to be used in premium and high-end smartphones in 2018. However, with rapidly improving designs in liquid crystal display (LCD) cell structure, thin-film transistor (TFT) array and light-emitting diode (LED) backlight, TFT LCD can now be used in full-screen smartphones.“With the improvement in TFT LCD technology, smartphone makers are now aggressively applying 18:9 aspect ratio of TFT LCD to their 2018 models even for mid-end and entry-level smartphones, instead of using high-priced flexible AMOLED panels,” said Hiroshi Hayase, senior director at IHS Markit.“It would be correct to assume that smartphone displays are undergoing a quick generation change to TFT LCD-based full screens later this year,” Hayase said. “The new generation of smartphones will be expected to stimulate replacement demand in the 2019 smartphone market.”
2018-07-17 00:00 reading：387
Popular categories
Boxes, Enclosures, Racks Cables, Wires Circuit Protection Connectors, Interconnects Development Kits Electromechanical Embedded Solutions Fans, Thermal Management Optoelectronics Others Passive Components Power Semiconductors Sensors, Transducers Test and Measurement
Hot labels
ROHM
IC
Averlogic
Intel
Samsung
IoT
AI
Sensor
Chip
Original authorized brand