The average selling price (ASP) of DRAM chips is projected to increase by 5 percent from the second quarter to the end of the third quarter as tight supply persists, according to market watcher DRAMeXchange.

While demand for DRAM chips, particularly from the smartphone market, has been tepid this year, the pace of technology migration has been slow and contributed to a tightening of supply, according to Avril Wu, research directory of DRAMeXchange, which tracks pricing of memory chips.

"This situation is anticipated to last to 2018 since suppliers will not take on significant additional production capacity in the short term," Wu said in a press statement. "Meanwhile, ASPs of various DRAM products will remain high."

Unlike previous supply and demand cycles in memory chips, DRAM chips are now being used in more and broader applications, said DRAMeXchange. New applications for DRAM such as graphic processing, cloud computing, automotive electronics and hardware acceleration for machine learning have helped to stabilize ASPs for DRAM, the firm said.

DRAMeXchange expects shipments of smartphones and PCs to remain relatively light in the third quarter. But DRAM demand stemming from the creation of new data centers and the coming of the holiday season for consumer electronics products will propel the DRAM market and drive up prices, the firm predicted.

This year is expected to be the strongest in years for memory chip prices, thanks to tight supply, which is projected to propel the overalll semiconductor industry to grow by a double digit percentage.

Next：Purple-emitting LEDs Get Closer to the Sun

Contract prices for DRAM chips are projected to fall by nearly 20% in the first quarter, as high inventories and weak demand couple with a downbeat mid- to long-term economic outlook, according to market research firm TrendForce's DRAMeXchange service.The price decline — steeper than the 15% that the firm originally forecast — is expected to be lead by server DRAM chips.Memory chip sales are widely expected to come falling back to earth this year after two consecutive boom years.In December, contract pricing of DRAM held relatively steady at about $60 per 8GB module and $30 poor 4GB module, according to TrendForce (Taipei). However, the prices for both have already dropped below those thresholds in January, according to the firm. January contract pricing is expected to be around $55 or less per 8GB module, the firm said, and there is a strong possibility that prices will continue to fall in February and March.According to TrendForce, the biggest problem in the DRAM market but the earlier arrival of the traditional slow season in the fourth quarter, which has resulted in higher inventories. In the short term, DRAM supply growth will remain higher than sales growth, so inventory levels will remain elevated — a condition that could persist for more than a year, the firm said.
2019-01-22 00:00 reading：492

The overall price trend in the DRAM market has been stable in December, showing no noticeable change from November, reports DRAMeXchange, a division of TrendForce. Clients in North America and Europe were taking a break during the year-end holiday season, so the quantities of DRAM products traded in December were too small to be considered in the survey of contract prices. With regard to contract prices of mainstream products, the monthly average of 8GB modules is staying roughly at US$60, while that of 4GB modules is around US$30. However, for both 8GB and 4GB ones, their monthly lows have already dropped below their respective US$60 and US$30 thresholds.DRAM suppliers and OEMs have already begun to discuss prices for the first-quarter contracts since last December. Taking account of the high inventory, the weak demand, and the pessimistic economic outlook for the medium to long term, both sides have reached a general consensus that prices of 8GB modules for the first-quarter contracts will be around US$55 or even lower. This implies that the average contract price of 8GB modules will drop by at least 10% MoM in January, and there is a strong possibility that prices will continue to fall in February and March. For the DRAM price trend in 1Q19, DRAMeXchange expects a quarterly decline of nearly 20%, steeper than the previous forecast of 15%, with the most noticeable decline in the segment of server DRAM.At present, the biggest problem in the DRAM market is not the growth of the industry’s bit output, but the earlier arrival of the traditional slow season in 4Q18, which has resulted in increasing inventory level earlier than expected. Among the major DRAM suppliers, Micron witnessed the biggest drop in prices in 4Q18, which lowered its inventory level timely. In comparison, South Korean-based suppliers experienced the lowest price fall and thus lower shipments, which may lead to considerable inventory level throughout 1Q19. For the short term, the supply bit growth will remain constantly higher than sales bit growth, so the inventory level will keep rising, and the prices will keep falling. This price downtrend may even last for more than four quarters from 4Q18.With oligopoly in DRAM market, module makers will face lower profitabilityContract prices of DRAM products have turned downward since 2H18, but further price competition in the highly concentrated DRAM market would only harm the suppliers’ high profitability. Therefore, DRAM suppliers have scaled back their CAPEXs for 2019 so as to stabilize the prices and moderate the oversupply.It should be noted that the distribution of the profit across the DRAM supply chain has been heavily skewed toward the memory suppliers in 2018. On the whole, the trend of rising prices that lasted for more than two years before 4Q18 has not produced significant gains for clients in the downstream. For memory module makers, most did very well in 2017 because the short-term price surge during the early phase of the price uptrend allowed them to translate their low-price inventories into profits. However, module makers were unable to extract profits from the price differences of memory chips at the start of 2018 because DRAM prices by then had become excessively high. Their profitability became dependent on just the additional processing work. As DRAM prices have now swung downward in 2H18, module makers carrying high inventories have been exposed to losses in each successive month. With revenues dropping, many of them are projecting that their actual profits for this year will shrink to around one tenth of last year’s (some are also expecting an annual loss). Going forward, 2019 will be even more challenging for module makers and the rest of the supply chain.
2019-01-16 00:00 reading：356 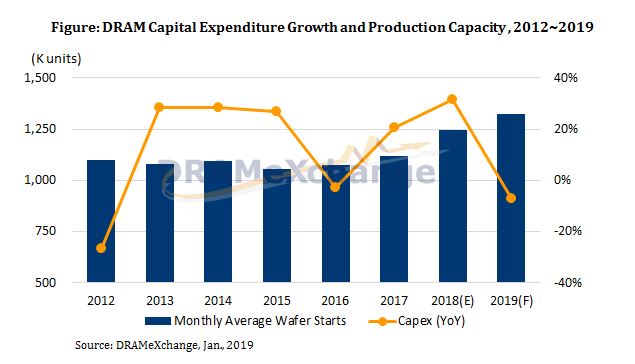 After contract prices of DRAM products turned downward sharply in 4Q18 by 10% QoQ, major DRAM manufacturers have tried to offset fall in prices by slowing down capacity expansion in 2019, as the demand outlook for PCs, servers, smartphones, and other end consumer products remains weak, reports DRAMeXchange, a division of TrendForce.DRAMeXchange points out that, manufacturers’ capex plans are normally the most relevant indicators for their actual bit output. In 2019, the total capital expenditure for DRAM production is forecast at about $18 billion, an annual decrease of 10%. This CAPEX is at the most conservative investment level in recent years.Samsung and SK Hynix have been the first two suppliers who announced the plans to cut their 2019 semiconductor capex. Samsung, the market leader, would spend $8 billion on capex in 2019, mainly for migration to advanced process (1Ynm) and development of new products. Samsung’s 2019 plan for wafer starts would be the most conservative in recent years. The company has also decided to terminate the production capacity expansion in its Pyeongtaek fab, which will lower Samsung’s annual output growth to around 20%, a new low over the years.SK Hynix says its 2019 capex will be reduced to $5.5 billion, mainly for migration to advanced process and yield improvement. However, its new fab in Wuxi has just been completed, with potential capacity expansion of 30-40K pieces for the whole year of 2019. According to DRAMeXchange, SK Hynix’s output growth would be 21% YoY in 2019, slightly higher than that of Samsung.As for Micron, who has recently announced to cut its capex to $3 billion, revised its 2019 output growth forecast downward to 15%, from almost 20% previously, in order to prevent its inventory level from increasing further. Micron would not expand its production capacity in its subsidiary Micron Memory Taiwan (formerly Rexchip), Micron Technology Taiwan (formerly Inotera), or its Hiroshima fab of former Elpida Memory, so Micron’s monthly wafer starts would remain 350K in 2019. And the output growth would only come from its migration to 1Ynm production this year. DRAMeXchange believes that Micron is more vulnerable to the drop in prices due to its weaker cost structure than Samsung and SK Hynix. Thus, Micron has to make more production and capex adjustments to cope with the price falls. As the result, Micron's market share would continue to decrease after two years with only 15% growth in bit output.Manufacturers try to avoid price competition and maintain profitability by slowing down capacity expansionIn the oligopolistic market with no new competitors, manufacturers have tried to adjust their production plans and cut down capex to avoid price competition. In terms of profitability, the gross margins of Samsung’s and SK Hynix’s DRAM production remain nearly 80%, while that of Micron remains over 60%. With such high margins, it is reasonable for the manufacturers to be conservative in their production outlook for 2019.On the demand front, the first quarter of 2019 will witness the weakest demand of the year due to holidays and seasonal headwinds. Moreover, there is currently no sign of demand recovery in the second quarter or afterwards. The market is still full of uncertainties due to the looming trade war between China and the U.S. Therefore, for the DRAM price trends this year, DRAMeXchange expects a quarterly decline of 15% in 1Q19, and less than 10% in 2Q19. For 2H19, the prices would continue to fall by 5% each quarter unless the demand is significantly improved.
2019-01-03 00:00 reading：399

DRAM will once again finish the year with the highest growth rate of any semiconductor product, though 2019 is shaping up to be a very different story, according to market research firm IC Insights.DRAM is expected to finish 2018 with 39% growth, following up its 77% growth in 2017, IC Insights said. DRAM has once again benefited from a steady surge of rising average selling prices over the past two years amid a shortage in the market.But the historically cyclical DRAM market appears to be headed for tougher times in 2019. After two strong years of growth, the world's leading DRAM suppliers — South Korea's Samsung Electronics and SK Hynix and U.S.-based Micron Technology — have significantly expanded their manufacturing capacity and are beginning to ramp up production, bringing relief to strained supplies, especially for high-performance DRAM parts, IC Insights said. Meanwhile, shipments of large-scale datacenter servers — the primary catalyst for much of the recent DRAM market surge — have begun to ease amid uncertain economic and trade conditions, the firm said.IC Insights predicts that that DRAM will rank near the bottom of all semiconductor categories in terms of growth rate in 2019, with sales forecast to decline by 1%.DRAM has consistently been at the top or near the bottom of all semiconductor products in terms of growth rate over the past six years, a testament to its highly cyclical nature, according to IC Insights. DRAM was also the fastest growing semiconductor product in both 2013 and 2014, according to the firm.
2018-12-19 00:00 reading：430
Popular categories
Boxes, Enclosures, Racks Cables, Wires Circuit Protection Connectors, Interconnects Development Kits Electromechanical Embedded Solutions Fans, Thermal Management Optoelectronics Others Passive Components Power Semiconductors Sensors, Transducers Test and Measurement
Hot labels
ROHM
IC
Averlogic
Intel
Samsung
IoT
AI
Sensor
Chip
Original authorized brand