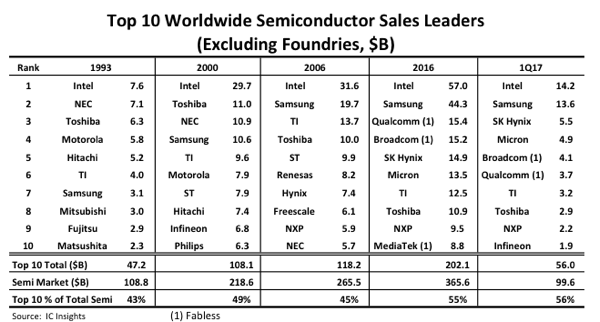 Intel held a slim 4% lead over Samsung for the number one position in 1Q17.  However, as reported in an earlier IC Insights’ Research Bulletin, Samsung is on pace to displace Intel as the world’s largest semiconductor supplier in 2Q17. Memory giants SK Hynix and Micron made the biggest moves in the 1Q17 ranking as compared to the full-year 2016 ranking.  Spurred by the recent surge in the DRAM and NAND flash markets, each company moved up two spots in the top-10 ranking with SK Hynix now occupying the third position and Micron moving up to fourth.

As would be expected, given the possible acquisitions and mergers that could/will occur this year (e.g., Qualcomm/NXP), as well as any new ones that may develop, the top-10 semiconductor ranking is likely to undergo some significant changes over the next few years as the semiconductor industry continues along its path to maturity.

Japanese automotive components supplier Denso Corp. grabbed a stake in German chipmaker Infineon Technologies, investing an undisclosed amount described as "the mid-double-digit million-euro amount."Denso and Infineon aim to accelerate development of new and emerging automotive technologies — including automated driving, vehicle electrification and electro-mobility — using Infineon’s intelligent sensors, microcontrollers and power semiconductors.Infineon — which currently has a market capitalization of nearly $23 billion — said the two companies have been working together for more than 10 years and that Denso wanted to underline the partnership with a small equity stake.In 2012, Infineon received a technical development award from Denso for its tire pressure sensor chip supporting built-in auto-location. The tire pressure monitoring system (TPMS) sensors measure pressure inside the tire and the pressure value is transmitted via RF to the receiving unit of the car. Auto-location means that the system automatically correlates the four received pressure signals with the appropriate four tire positions.Denso's investment comes as the company recognizes that with increased functionality in vehicles and advanced electronic control, demand for semiconductor products will grow exponentially. Next-generation vehicle systems required for widespread automated driving, electrification and connected cars are becoming more sophisticated and will feature more advanced technology. The company said it has been working with chip suppliers like Infineon to enhance in-vehicle semiconductor product development.“We would like to establish optimal semiconductor solutions for in-vehicle electronics systems through strong partnerships with semiconductor companies in order to enhance the competitiveness of automated driving and electrification systems,” said Hiroyuki Ina, Denso's senior executive director, in a press statement.Denso, headquartered in Japan's Aichi prefecture, has approximately 220 subsidiaries in 35 countries and regions.Last month, Denso announced that it is establishing a new facility at Haneda Airport in Tokyo to develop and test automated driving technologies. The facility, which is expected to be completed by June 2020, will feature a building and proving ground for mobility systems R&D. This location is part of a broader initiative led by Tokyo’s Ota City, Denso  and other entities to transform underutilized space at the airport into a hub for leading-edge technology development and mixed-use cultural facilities.Denso also established an automated driving R&D office near Shinagawa Station in Tokyo's Minato to promote collaboration and open innovation with its development partners, which include automakers, universities, research institutes and startups. This facility will include a building to develop prototypes and maintain test vehicles and also a proving ground to conduct live, in-vehicle tests.
2018-11-27 00:00 reading：497

Infineon Technologies AG has acquired Dresden, Germany-based startup Siltectra to use its cold split technology to split silicon-carbide (SiC) wafers, doubling the number of chips on a wafer. The company was acquired for 124 million euros (about $139 million).Siltectra was founded in 2010 and has an IP portfolio of more than 50 patents. The startup developed a technology for splitting crystalline materials with minimal loss of material compared to common sawing technologies. This technology can also be applied to SiC, for which rapidly rising demand is expected in coming years.SiC products are already used today in very efficient and compact solar inverters. In the future, SiC will play a more and more important role in electro-mobility. The cold split technology will be industrialized at the existing Siltectra site in Dresden and at the Infineon site in Villach, Austria. The transfer to volume production is expected to be completed within the next five years.“This acquisition will help us expand our excellent portfolio with the new material silicon carbide as well,” said Reinhard Ploss, Infineon CEO. “Our system understanding and our unique know-how on thin wafer technology will be ideally complemented by the cold split technology and the innovative capacity of Siltectra.” He said that the higher number of SiC wafers will make the ramp-up of SiC products much easier, especially to address further expansion of renewable energies and the increasing adaptation of SiC for use in the drivetrain of electric vehicles.Infineon said that the cold split technology will help to secure the supply of SiC products, especially in the long run. Over time, further applications for cold split technology might emerge, such as boule splitting or the use for materials other than silicon carbide.Early this year, Siltectra announced its patent covering an extension of its silicon-carbide process capability to split materials with sub-100-micron material loss, regardless of vendor-specific SiC crystal-growing processes. Driving down SiC material loss helps accelerate adoption of the substrate for power devices and other ICs. Until now, its cost has inhibited fast adoption. Cost reductions enabled by Siltectra’s technology could speed deployment of SiC for a broader range of applications, including EVs and 5G technology.
2018-11-14 00:00 reading：416

Infineon Technologies AG will spend 1.6 billion euros ($1.9 billion) over six years to build a new factory in Austria, in a bet on rising demand for semiconductors that go in everything from electric cars to wind turbines.Infineon will create 400 new jobs at the new site in Villach in southern Austria, where the production of 300-millimeter thin wafers is due to start in 2021. The factory is next to an existing company facility and has the potential to generate 1.8 billion euros in yearly sales, the company said.“Customers around the world are rushing through our doors to place orders,” said Infineon Chief Executive Officer Reinhard Ploss at an event in Vienna Friday. “Growth is underpinned by global megatrends such as climate change, demographic change and increasing digitization,” and the investment will allow the company to hold its technological leadership in the industry, he said.The company is seeking to hire staff from around the world, and the Austrian government has agreed to expand education and research facilities in the Carinthia region to help Infineon’s growth plans. Austrian Chancellor Sebastian Kurz at the event in Vienna called the investment a “historic one and the biggest in a long long time” in the country. The government is in talks with other “major international companies” to support a re-industrialization in Europe, he said, without giving details.Infineon, which competes with NXP Semiconductors NV and STMicroelectronics NV, is pushing into the growing market for electric cars and renewable energy that provides fresh revenue streams as demand for semiconductors used in smartphones and tablets slows. It’s part of Ploss’s bet on trends such as energy efficiency, connectivity and mobility.In March Infineon and SAIC Motor Corp Ltd., China’s largest automaker by sales volume, revealed a new joint company to produce power modules for Chinese manufacturers of electric cars and plug-in hybrids, jointly investing at least 100 million euros ($122 million) and hiring 250 people to expand Infineon’s chip factory in Wuxi.
2018-05-22 00:00 reading：496