IC Insights Inc. Wednesday (March 29) said it now expects IC revenue to increase by 11 percent this year due to a substantial upgrade to the forecasts for DRAM and NAND, which the market research firm now expects to grow by 39 percent and 25 percent, respectively. IC Insights had previously forecast that the chip market would grow 5 percent in 2017.

Market watchers generally agree that 2017 should be a year of moderate growth for the semiconductor market after the industry posted a surprise 1 percent increase in sales in 2016, but 11 percent is among the most aggressive predictions to date. The World Semiconductor Trade Statistics organization and market research firm Gartner Inc. are both calling for around 7 percent growth for the year.

The DRAM market growth is expected to be driven almost entirely by a 37 percent increase in ASPs compared with 2016, when DRAM ASPs declined by 12 percent, IC Insights said. NAND ASPs are projected to increase by 22 percent this year after falling 1 percent last year, the firm said.

IC Insights said DRAM ASPs increased from $2.41 in April 2016 to $3.60 in January of this year, a 49 percent jump. The spike was caused by a surge in demand from PC suppliers during the second half of 2016, the firm said.

The DRAM market is projected to be worth $57.3 billion this year, by far the largest IC product category, according to IC Insights. 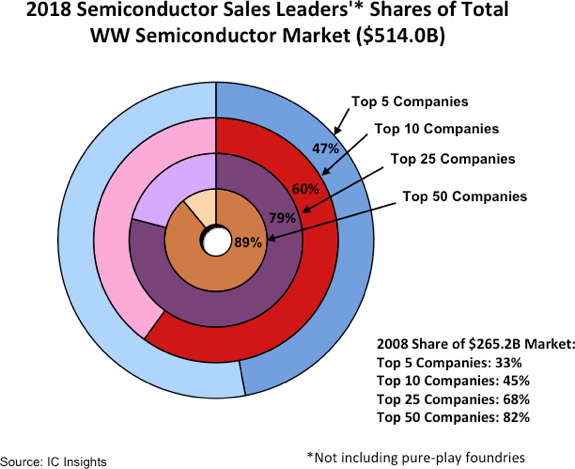 Semiconductor Leaders’ Marketshares Swell Over the Past 10 Years

Last week, more than a dozen senior semiconductor executives traveled to Washington, DC for the first-ever Fall Washington Forum. The SEMI Washington Forum, a venue for SEMI members to educate lawmakers about the industry, focused on action against China, both in the form of tariffs and export controls.Our industry is global, and companies rely heavily on trade. In 2017, more than 90 percent of equipment made in the United States was exported. Because of this dynamic, the United States holds a nearly $9 billion trade surplus in this industry. SEMI is supportive of trade policies that open foreign markets.In the meetings, the executives expressed deep concern that the tariffs would inflict deep damage to the U.S. economy, including to SEMI members. Estimates suggest that the Sec. 301 tariffs (and the Chinese retaliatory tariffs) will cost semiconductor companies more than $700 million annually, dramatically increasing the cost of doing business. These tariffs also threaten U.S. technological leadership. The United States has led innovation for decades. However, by pursuing policies that limit market access opportunities, company-led R&D and innovation will slow, which, in turn, will curb further export potential.SEMI companies also stressed that because of the blunt application of these tariffs, this action will actually hurt U.S. companies as much as it hurts their Chinese competitors. Indeed, about 40 percent of imports in our sector from China are from U.S. or other non-Chinese companies. Further, the semiconductor industry relies on a vast network of supply chains, which have been built and qualified over the course of years. A fundamental revamp of supply chains is simply not feasible. This would be expensive, time-consuming, and resource-intensive.With a growing number of policy issues that are central to and could have significant impact for semiconductor companies, SEMI hosted its first ever Fall Washington Forum for members of its North American Advisory Board (NAAB). SEMI also invited several other industry executives. In total, 14 senior industry executives, including representatives from equipment manufacturers, component suppliers, and materials providers, attended the Fall Forum.During the two days of meetings, SEMI met with several senior Administration officials to better the policies being enacted and considered as well as encourage all parties to not impose barriers to commerce, which would severely impact the semiconductor industry. SEMI also met with Members of Congress and their staffs on this issue.All told, attendees at the Fall Forum had more than 15 meetings with policymakers, reflecting the great impact of public policy on SEMI members companies. At a time when the stakes for the industry could not be higher, direct engagement with lawmakers is critical. The Washington Forum offers an incredible opportunity for members to better understand the impact of key public policy issues and gain firsthand experience in influencing policy and helping lawmakers better understand the industry.
2018-09-27 00:00 reading：396

Global semiconductor industry revenue grew 4.4 percent, quarter over quarter, in the second quarter of 2018, reaching a record $120.8 billion. Semiconductor growth occurred in all application markets and world regions, according to IHS Markit (Nasdaq: INFO).“The explosive growth in enterprise and storage drove the market to new heights in the second quarter,” said Ron Ellwanger, senior analyst and component landscape tool manager, IHS Markit. “This growth contributed to record application revenue in data processing and wired communication markets as well as in the microcomponent and memory categories.”Due to the ongoing growth in the enterprise and storage markets, sequential microcomponent sales grew 6.5 percent in the second quarter, while memory semiconductor revenue increased 6.4 percent. “Broadcom Limited experienced exceptional growth in its wired communication division, due to increased cloud and data-center demand,” Ellwanger said.Memory component revenue continued to rise in the second quarter, compared to the previous quarter, reaching $42.0 billion dollars. “This is the ninth consecutive quarter of rising revenue from memory components, and growth in the second quarter of 2018 was driven by higher density in enterprise and storage,” Ellwanger said. “This latest uptick comes at a time of softening prices for NAND flash memory. However, more attractive pricing for NAND memory is pushing SSD demand and revenue higher.”Semiconductor market shareSamsung Electronics continued to lead the overall semiconductor industry in the second quarter with 15.9 percent of the market, followed by Intel at 13.9 percent and SK Hynix at 7.9 percent. Quarter-over-quarter market shares were relatively flat, with no change in the top-three ranking. SK Hynix achieved the highest growth rate and record quarterly sales among the top three companies, recording 16.4 percent growth in the second quarter.
2018-08-23 00:00 reading：552 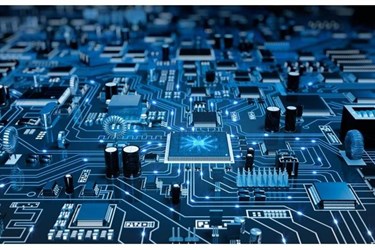 According to new figures from the Semiconductor Industry Association (SIA) sales of semiconductors in the second quarter were up 6% q-o-q and 20.5% y-o-y at $117.9billion. June sales were ahead 1.5% on the month and 20.5% from June 2017 to $39.3 billion.“Halfway through 2018, the global semiconductor industry continues to post impressive sales totals, notching its highest-ever quarterly sales in Q2 and record monthly sales in June,” said SIA CEO John Neuffer, “global sales have increased year-to-year by more than 20% for 15 consecutive months, and sales of every major product category increased year-to-year in June.”According to the SIA, semiconductor sales increased compared to June of last year in China (30.7%), the Americas (26.7%), Europe (15.9%), Japan (14.0%), and Asia Pacific/All Other (8.6%). June sales were also up compared to May in China (3.2%), Japan (1.3%), the Americas (1.2%), and Asia Pacific/All Other (0.5%), but down slightly in Europe (-0.8%).Worldwide sales of semiconductors during the first half of 2018 were 20.4% higher than they were at the same point in 2017.
2018-08-22 00:00 reading：462
Popular categories
Boxes, Enclosures, Racks Cables, Wires Circuit Protection Connectors, Interconnects Development Kits Electromechanical Embedded Solutions Fans, Thermal Management Optoelectronics Others Passive Components Power Semiconductors Sensors, Transducers Test and Measurement
Hot labels
ROHM
IC
Averlogic
Intel
Samsung
IoT
AI
Sensor
Chip
Original authorized brand